Ham Morse allows you to practice morse code on your iPhone or iPad. It is designed particularly for Ham radio operators and others who wish to achieve or maintain a high level of proficiency in this classic mode of communication.

We have a Support page where you can ask questions and get help as needed. We keep track of what’s changed on the Release Notes page, and you can read the app’s Privacy Policy.

You can practice morse code created from the following:

The code is sent using the Farnsworth timing whereby the morse characters are sent at 15 words per minute (WPM) and then extra spacing is added to slow the overall WPM to speeds slower than 15 WPM. The farnsworth speed can be adjusted if you wish to use a speed other than 15WPM. The maximum speed that the morse can be sent at is 50 words per minute. The morse audio waveforms have a 5ms rise time to reduce key clicks and yet provide crisp code to copy.

The code can be paused just in case you are interrupted or want to take a break, an incoming call on an iPhone pauses the code automatically. Ham Morse is iOS5 multitasking compatible so you can put the app in the background and come back to it at a later point and everything is ready to go.

To help you learn the morse code itself HamMorse allows you to practice a variety of sets of characters from individual random letters all the way to the current news stories from around the world. Here are some more details of the available modes: 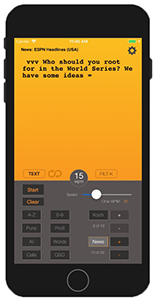 Welcome to the support page for the Ham Morse iOS application. Your feedback on the app and how its working (or if its…

We do not directly gather any personal data such as e-mails, first or last names, phone…