Welcome to the new site!

Its a brand new look for AA9PW.com! After many years of WordPress combined with various hacks and other disruptions I figured it was time to change things up and move to something a bit more modern. This new site is built using Hugo, a Static Site Generator (SSG) that uses the Go programming language under the hood.

This is still a work in progress and I imagine I’m going to be tweaking things for a while. The main benefit is that I can move away from having WordPress, a backend database and the required hosting infrastructure, to something a bit more streamlined. The previous site wasnt really using much of the tools that WordPress provides but it was still subject to the various hacks and security risks that came with using the popular blogging platform.

There are other benefits to using Hugo is that this new site should be quite a bit faster to load.

The one wrinkle in moving away from a standard Unix server environment is that this would totally break the morse code practice page which is one of the more popular parts of the site. This code was written in Perl as a CGI script probably back in the late ’90s and while its stil running fine, its a bit clunky by modern standards. Originally it created .au audio files which were fairly standard at the time until a the .mp3 format came along I added support for mp3 by converting the .au to .wav and from there to .mp3 using the SoX and lame libraries.

The downside with this approach was that it had to create various audio files on the filesystem so that these could then be played back, then they had to be cleaned up over time so the storage wasn’t all used up, etc. With a static site things are static, there’s typically no underlying file system you can write to to save a sound file so it can play back so a new solution was needed.

Fortunately, Fabian Kurz (DJ5CW) has developed jscwlib, an excellent javascript morse implementation, which has allowed me to recreate the morse generator without needing the server-side code. I have the main functionality recreated, Im still working on the code for the QSO generator. This new approach will also allow me to improve the morse code features and so I’ll be working on that as time allows. 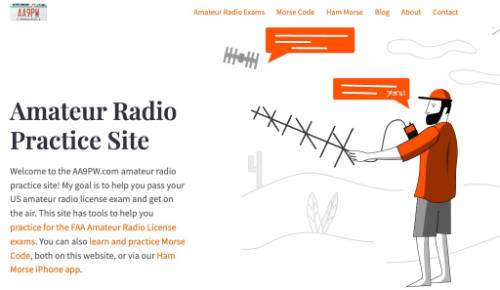